What is her view on home birth? 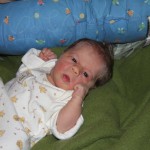 For those considering a home birth I’d like to share my viewpoint and experiences. Initially we were going to go the hospital, but at 34 weeks, we realized that we would prefer to do a home birth. We did have the influence of two educational films about home birth and hospital births. Nanci Stanley became our midwife and I started seeing her at 35 weeks.

My concern and dislikes about a hospital birth are many, but here are a few. The fact that polices must be in place to protect against law suits and hence I am treated more like a product than a individual. The lack of interest to encourage natural birth. The only available birthing position was laying down which defies gravity. The requirement (though some hospitals allow a room in policy) that babies go to nursery from 2-4 hours. The experience that I was encouraged to push for 4 hours, which in my opinion was necessary because I was required to lay down. The experience that they only allowed me 35 minutes to nurse the baby, then took him away for 4 hours. The statistic that there is a extremely high cesarean rate in the US, and seems it’s more convenient for doctors to do a cesarean on their time verses waiting on a women to labor on the weekend. And, the encouragement of pain meds, which ministers to the “painless at my convenience” lifestyle.

My new found appreciation of home birth and experiences are many. First the personal visits that allow my midwife Nanci to look at me as a whole person. Recognizing the emotional, spiritual, and physical involvement of producing a baby. The constant reminding me (some of you may not need it as much as I did) of trusting in God’s timing regarding the labor. I only received 7 weeks of care, but in that time I felt like I was attending a therapy session instead of a quick 10 minute visit with a doctor who pretends to show interest in my life.

One office visit with my doctor, I walked by his office 2 times waiting to be seen. He apparently was waiting for clientèle to build up as I saw him first texting on his phone and the second time reading a hunting magazine. Anyway, my midwife shows her sincere interest in my life and allows time to develop a solid relationship. Calling at crazy hours for silly questions, she was always available and never short with me. 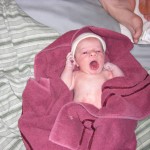 I had several false runs, in that, I thought I was in labor, and the thing that was always mentioned was, “I will know”. And this showed itself to be true. Finally when I did call, of course her timing was prompt. The environment of my home was calm, peaceful, and sweet. The labor was amazingly short and not forced and pushed in any way. There were prayers being spoken, not nurses yelling out, “blast that baby out!”. Nanci kept telling me to listen to my body. I was able to move about, do my own thing, and rest in God’s timing.

Best of all for me in a home birth was the freedom to go about my business as long as I could and then focus in on task at hand. Everyone deals with pain differently, for me, I just rather fight through by focusing on my children, or going out and doing errands. Finally when the pain become defeating and unbearable, that was perfect timing for the midwives to start speaking God’s truth over me and again allowing me to align my thoughts to not focusing on myself and woe is me mentality.

Pain is real, but rather a better word for pain is hard work. It’s a natural part of life and viewing birth as such alleviates a women to accepting all the up and downs of pregnancy. One lesson I learned that I will carry to any other births is this, “Being at Peace”, not allowing myself to be lead by my emotions. Resisting from questioning the unknowns and focusing on the truth of God’s Word. The midwife I choose was heaven sent, and I hope to use Nanci again. She gave stability when I was lacking, confidence when I had very little, and reassurance of God’s plan when I doubted. These alone give her far more credit than medical profession can offer. I was blessed to be a patient of hers.